The Man Behind Muldoon

Integrity was a hallmark of this civic-minded homesteader…

Picture of Arnold L. Muldoon on porch with dog and fish used in Anchorage magazine article.

A great deal of effort has recently gone into planning the future of the Muldoon section of Anchorage. If he were around to see it, Arnold Muldoon probably would approve. He was very used to hard work and, by all accounts, was appalled by the swift and uncontrolled growth with which his neighborhood has become synonymous.

A true pioneer, Muldoon first came to Alaska in 1938 at age 29. As a young man in southwestern Wisconsin, he apparently dreamed of going to the wilderness, where he could build a future through physical labor. It was an understandable dream during the high unemployment and low agricultural prices of the Great Depression. But the young man had obligations: Muldoon was expected to help keep the family farm going.

His sister, Esther, sympathized with his ambition and yearning to prove himself, and agreed to find help to fill in for Arnold. With that assurance—and a gratitude he felt deeply all his life—he surrendered to his dream and set out for Juneau.

But Juneau was only a stepping stone, for within a year he continued north to Anchorage, where there was still plenty of beautiful land open for homesteading. After surveying the possibilities, Muldoon decided on several hundred well-wooded, gently sloping acres near the foothills of the Chugach Mountains, overlooking the little town and port of Anchorage perched on the shore of Cook Inlet eight miles to the west. It would prove to be a fateful choice.

He packed in supplies and built a small, log cabin. But just as he set about clearing land for farming, world events overtook Anchorage. Soon after the attack on Pearl Harbor, the U.S. Army appropriated all undeveloped land south and west of the newly built Fort Richardson to use for defensive gun emplacements and gunnery practice. Along with everyone else in the woods, Muldoon was forced to evacuate. 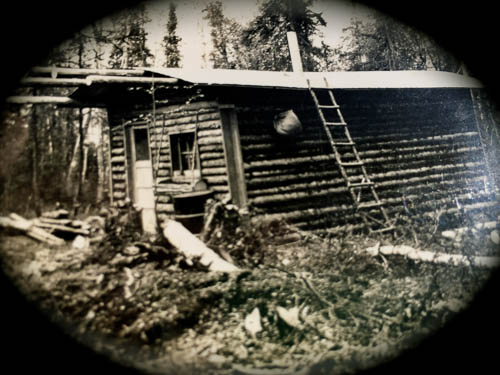 After the war Muldoon moved back to his homestead and began to try to “prove up” in earnest, clearing land and putting in seed grain and hay. One of his first tasks was to clear a road—by hand—several miles from the new Glenn Highway up to his homestead. It quickly became known as Muldoon’s road; it still is.

Meanwhile, other would-be settlers moved in around him, some benign and some not. Two who were not paid Muldoon a visit one day. They had designs on his choice property and were determined to scare him out. They came from down where the James brothers, Jesse and Frank, had lived, they said, only they were smarter. Alaska was a great country for getting rich quick, they suggested, and they aimed to get theirs and get out. They planned to do that by using “borrowed” military equipment to clear the land and then sell it—and anything else they could purloin from the government—for usurious prices. They wanted Muldoon to join them, most likely to buy his silence. He wasn’t interested.

A modest, hardworking, civic-minded and honest man who kept to himself and never married, Muldoon built a reputation for integrity, quality workmanship and traditional values. He was also a fighter, albeit a quiet one. He simply refused to be intimidated.

When the James brothers wannabes realized what they were up against, they turned up the heat, literally. First, they tried gunfire, shooting at Muldoon from the cover of the woods as he worked on his cabin. When that didn’t work, they set fire to the woods and when the fire marshal responded, blamed it on Muldoon. But officials knew who was more likely to be trustworthy, and it wasn’t the would-be James boys.

They continued to threaten Muldoon, saying that if he didn’t give them some of his best land, they’d run him off. Muldoon’s nephew, Bruce Novinska, who lives today in Chugiak, surmises that intimidation probably made his determined Irish uncle more stubborn.

But in a sense, his tormentors represented a more systemic, emerging threat that Muldoon would not be able to withstand: development.

By the mid-1950s, speculators were opening land in the area at what Muldoon called a “breakneck pace.” Businesses worked their way steadily up Muldoon Road toward his property. The wilderness quickly disappeared. In addition, vandals kept breaking into his cabin while he was at work. In 1956, Muldoon surrendered to the inevitable and moved downtown.

Fueled by Alaska’s new oil wealth, development continued under boomtown conditions, with no zoning until the early 1970s. Some found charm in little cabins overshadowed by modern, 3,500-square-foot homes. But Muldoon Road became a crowded, dangerous track with ramshackle buildings thrown up without regard to safety or sensible construction codes, and no notion of aesthetics.

City engineers addressed the situation a decade ago by constructing a proper urban thoroughfare with appropriate signals and traffic control. More recently, planners proposed a sign ordinance for Muldoon Road. 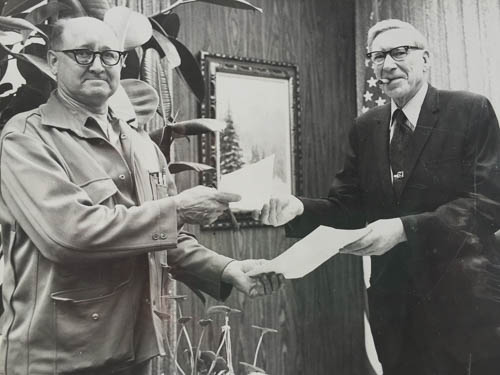 Arnold Muldoon, left, with Greater Anchorage Area Borough Mayor John Asplund, after the last of his homestead was sold to the Borough for less than half its appraised value; it is now Arnold L. Muldoon Park.

One idea that has attracted considerable attention is building a town center near the intersection of Debarr and Muldoon roads. The Anchorage comprehensive plan calls for seven town centers that would encourage community by providing pedestrian-friendly spaces with a mixture of ground-level specialty shops and offices along wide, well-landscaped sidewalks with affordable apartments above. The Anchorage Assembly endorsed developer Mark Pfeffer’s concept for a Muldoon Center in July 2001, the first such idea to come forward. It includes restoring Chester Creek just south of Debarr Road and at the bottom of the hill that Arnold Muldoon homesteaded. A creekside plaza with shops, offices and restaurants would be easily accessible to seniors. Arterial streets would be re-routed around the center. The project would give Muldoon the sense of place it has never had.

Arnold Muldoon never lost his love for the land he first homesteaded in 1939, and he stayed loyal to his civic values. He retained 74 acres of his land—at the corner of Northern Lights Boulevard and Muldoon Road—which he sold to the Anchorage Borough for half its value in 1974, provided that much of it be designated as a park.

Before he died in 1985, Muldoon set aside funds for a statue of William H. Seward, who was responsible for the purchase of Alaska in 1867. In 1991 artist Richard MacDonald created a jaunty, lifelike cast of Seward that stands at the main entrance of Z.J. Loussac Public Library.

Arnold Muldoon is buried in Valley Memorial Gardens in Palmer because he said he wanted to be within sight of Pioneer Peak. His legacy to Anchorage is an important one. The park, Muldoon Elementary School—which is named for him—and the Seward statue all testify to his sense of civic responsibility and his vision of something more in life than simply getting rich and getting out. In time, the section of town that carries his name may convey that sense as well. 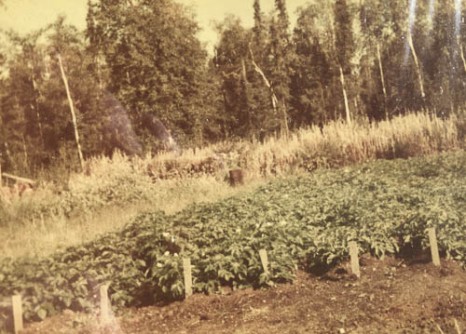 Picture of Arnold L. Muldoon on porch with dog and fish used in Anchorage magazine article.

Arnold Muldoon, left, with Greater Anchorage Area Borough Mayor John Asplund, after the last of his homestead was sold to the Borough for less than half its appraised value; it is now Arnold L. Muldoon Park.

Rebuilt cabin (Not sure of location). 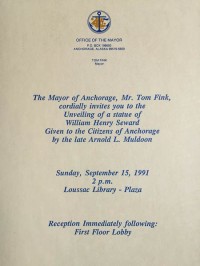 Letter to the editor of The Anchorage Times after Arnold Muldoon & Anton Anderson, lead engineer for the Whittier tunnels and later Anchorage mayor, conversed on the Port of Anchorage folly.

Allen Pulis, Bud Moore and Craig King ease a sculpture of William H. Seward onto its base at the entrance of the Loussac Library. The sculpture was a gift to the city from the estate of Anchorage homesteader Arnold Muldoon, who bequeathed $50,000 to the city for a Seward sculpture when he died in 1985. The 900-pound bronze likeness was sculpted by Richard MacDonald of Placerville, California. Dedication ceremony Sept. 15, 1991.

Arnold Muldoon in front of glacier.

One thought on “Arnold L. Muldoon”